Drawings and text by Amy Forsyth. Ellie Richards has added some wonderful photos to the earlier blog posts, so check them out!

The weeks are flying by so quickly! And the studios are filling with amazing objects! This week, we’ve had to write artist statements, give our lists of planned exhibition inclusions, provide images, etc, so all the folks at the Center can design the show and the catalog. It’s a little startling, but a good way to focus our attention on trying to finish what we’ve started, or at least reach a good stopping point. We’ve all really gotten into a productive groove, so it’s kind of sad to realize that we have to have at least one eye on the deadline.

In addition to trying to finish up projects, there have also been field trips we’ve been eager to take, so this week was a good time to make those happen. On Tuesday, we visited Mark Sfirri’s amazing wood shop, a miracle of organization and home of incredible experiments in off center turning, among other investigations. We took Mark to lunch, and then he took us to a chocolate shop in New Hope, owned and operated by Barbara Serratore, whom we’d all enjoyed meeting several weeks ago at Echo Lake. She and Mark spoiled us and sent us off with treats.

Our next stop was the Wharton Esherick Museum. Our guide there was Al Trapuzzano, a furniture maker who always gives a great tour. I’ve been there probably 20 times, since I take my furniture class there every year, but I always manage to find something wonderful I hadn’t noticed before. You can imagine how excited and inspired the rest of the group was to see a building so closely integrated with its furnishings and its creator. We had the additional treat of being invited into the blue house, designed by Lou Kahn and Esherick together, where Esherick’s son-in-law still lives. That is usually off limits, but Bob welcomed us graciously.

Docent extraordinaire Al Trappuzano, and some sketches of Esherick objects

We made the mistake of heading back to Philly around 5pm, so we all got to experience the joys of rush hour. Josh has been our patient driver most of the time, and he calmly guided us back to the city.

The following day, I had made an appointment for us to experience the REAL Wanamaker Organ, housed in Macy’s. A few years ago, I had given a talk at UArts, where I showed some of the musical objects I had made. A slender fellow with chiseled features came up to me afterwards and informed me that I needed to follow him to see something amazing. His name is Scott Kip, and he is a graduate of the wood program at UArts, and one of his jobs is to restore the organ. He is one of several specialists on staff, who maintain and restore the 28,000 pipes and the mechanism that keeps it playing. The organ is played twice a day, and there has been a stir recently around the restoration of the organ facade, which is basically the symbolic image of the organ, which has been painted bright gold. What most people don’t know is that those golden pipes are not the actual organ, they don’t even play. The real organ is in a maze of small wooden rooms on several floors above the department store. Scott’s tour of the organ takes you on excursions up ladders, through tiny openings and narrow pathways, ducking under bellows and around columns still painted to look like the Egyptian Hall from the 1920’s, but currently embedded within a contemporary dropped ceiling. We travelled through a surreal landscape of giant bass wooden box organ pipes, 30 feet tall, under the breathing bellows, up a narrow ladder and a narrower hatchway into rooms with arrays of pipes of varying materials, then out into the department store, where women were shopping for dresses. Back into the wooden rooms full of organ pipes, then through a long series of rooms decorated for Christmas, with clockwork figures wrapped in plastic, just waiting for a cooler season. Grand staircases that crash into drywall partitions on the way to the Wurlitzer organ, which is a small version of the building size organ housed all around us, scented by warring fragrances being tested in the elegant room below. It’s an amazing and surreal journey through a dizzying variety of spaces and materials. 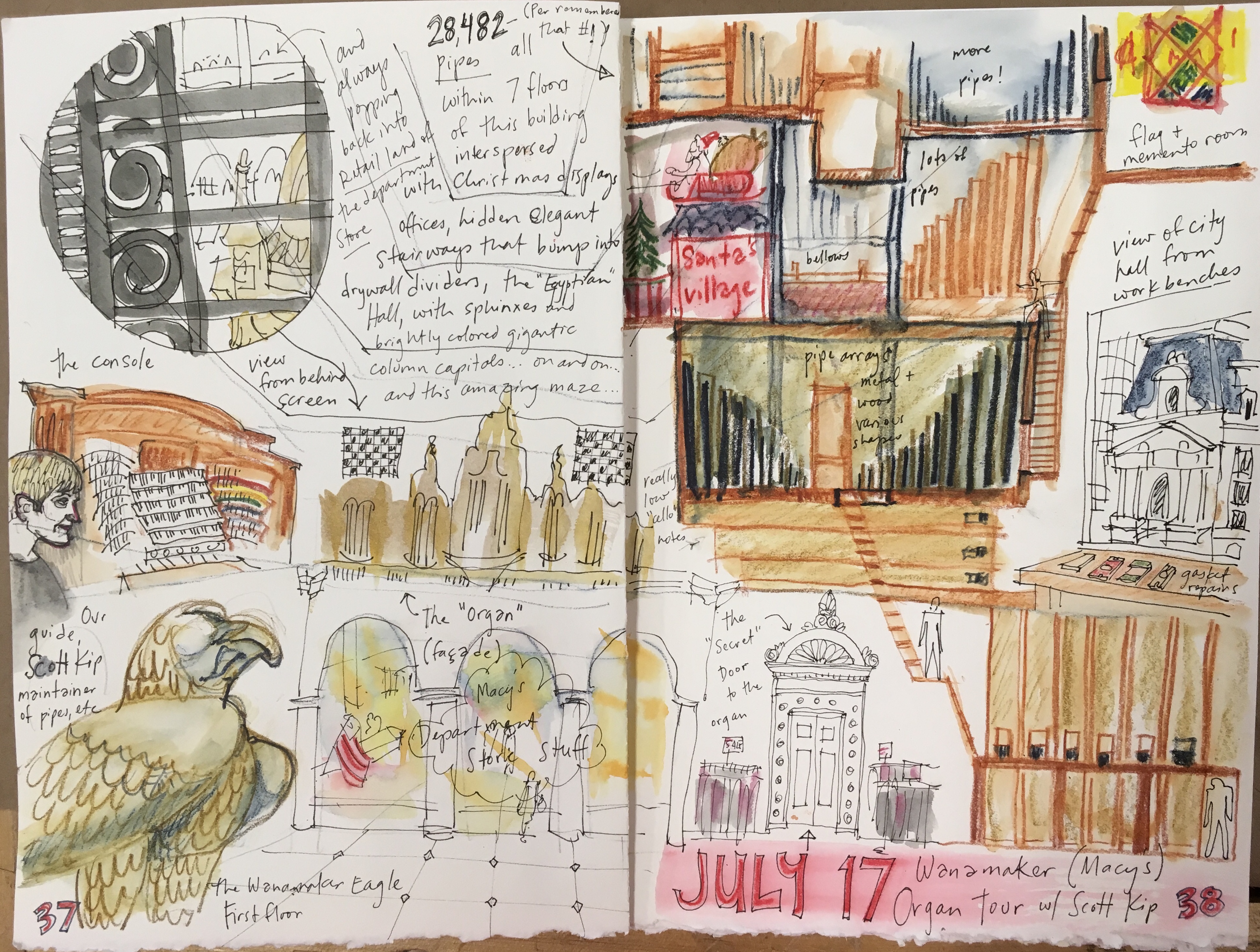 After that, we all got back to work. I spent some time seeing what Heide has been working on, since I missed her last week. Her careful testing of unusual materials results in some absolutely gorgeous surfaces and objects. She’s been working on a series of boxes with material variations for the doors, knobs, and backs, capturing denim in epoxy, turning soapstone knobs on the lathe, weaving different kinds of fibers, using natural materials such as turmeric for dyes, using eggshells as surface and pattern for a knob. It’s all such lovely stuff, especially with her perfectly lacquered black boxes as backgrounds.

And, of course, both Hartmut and Josh continue in their daily production. Per has been steam bending beautiful thickets of twisting limbs. Here’s a drawing of Josh’s most recent sculpture-a-day projects. He’s making them faster than I can draw them!

The security guards are very nice. Some of them are there at the entrance every day. This is Anthony, who usually works in the late afternoon until closing.

Jacob has been testing all kinds of things, casting concrete, turning forms (some enormous!) on the lathe.

I’ve been working on more of my train drawings.

Yes, that is Jacob at the Station, and no, he wasn’t actually there.

Just so you don’t think I’m the only one who draws, around here, let me include a few sketches by the other residents.

This is a sketch by Per, showing how his bent wood pieces should be located in the gallery

This sketch is also by Per, a sketch of his bending jigs 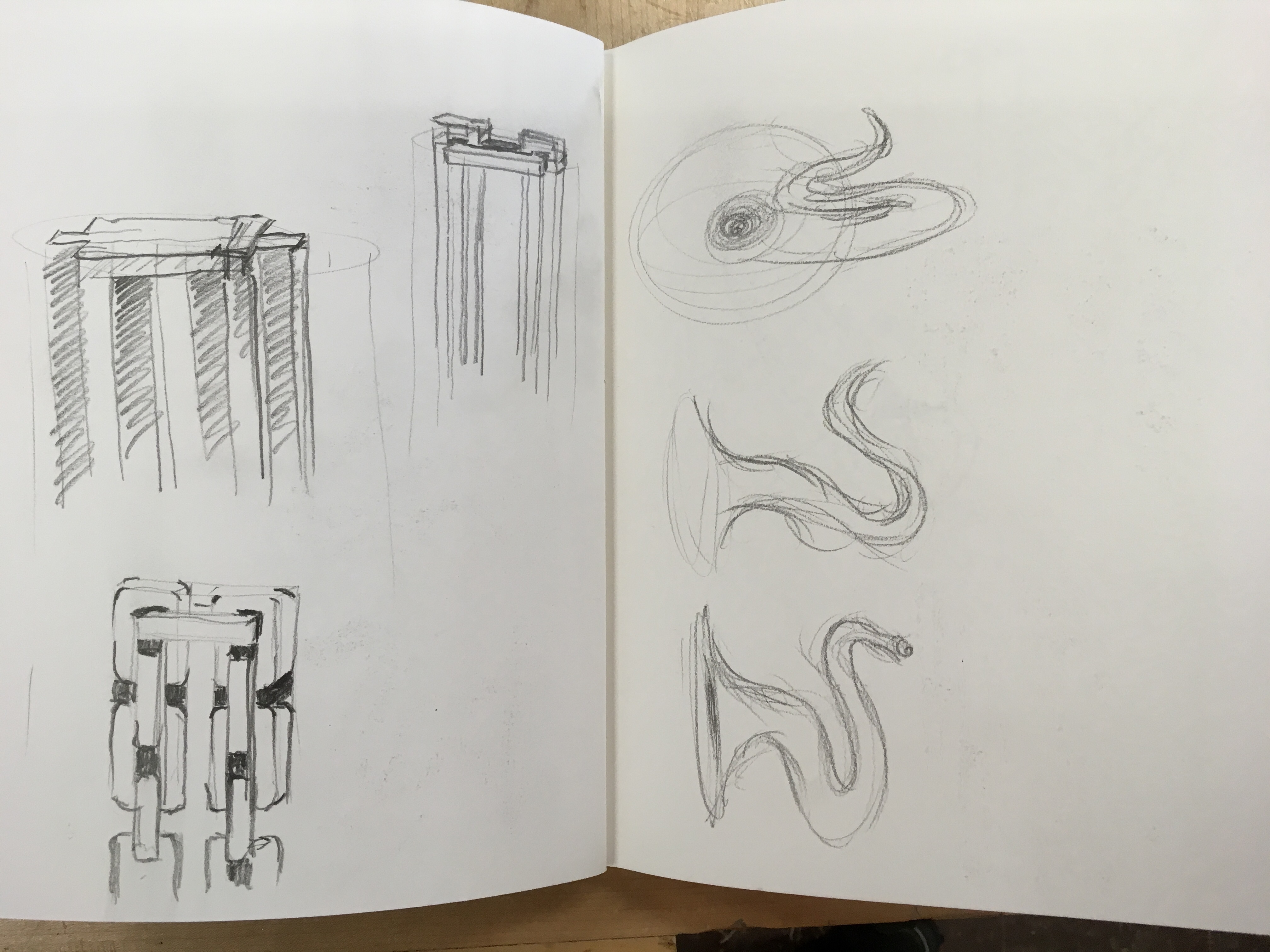 Sketch by Hartmut, showing how to carve a chain, and initial sketches of his tuba piece

Sketches by Hartmut, studies for his woodblock prints and his octopus tentacles

Ellie’s entirely different approach to sketching, where she transforms a book using collage

Josh reveals his architectural training in these gorgeous sketches. 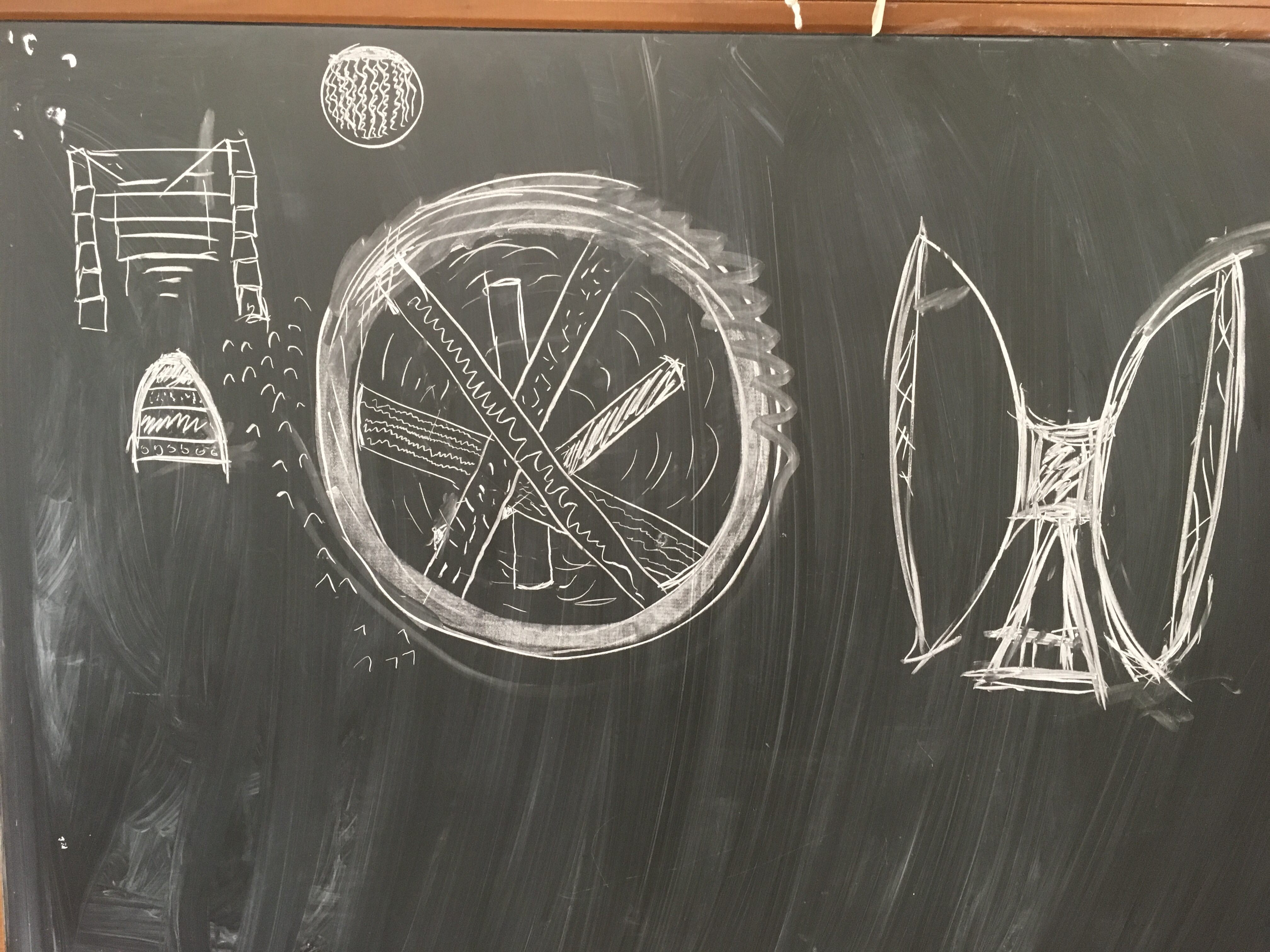 Jacob’s chalkboard sketches in the room where he’s working.

It’s Sunday, and we get kicked out of the building at 5 pm, so there are plans to get Philly Water Ice (pronounced “wudder issss”) on this hot, hot day. Next week will be dedicated to finishing things up and framing, even delivering some work to the Center.